Aurora is now the undisputed "Queen of Green."

The 5.03-carat "Aurora Green," the largest and finest fancy vivid green diamond ever offered at auction, was scooped up by mega-retailer Chow Tai Fook Jewellery for $16.8 million at Christie's Hong Kong on Tuesday. 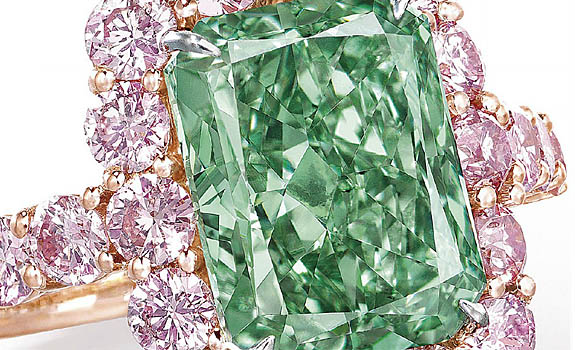 The previous records for a green diamond were held by “The Ocean Dream,” a 5.5-carat fancy vivid blue-green diamond that yielded $8.6 million ($1.5 million per carat) at Christie's Geneva in 2014. 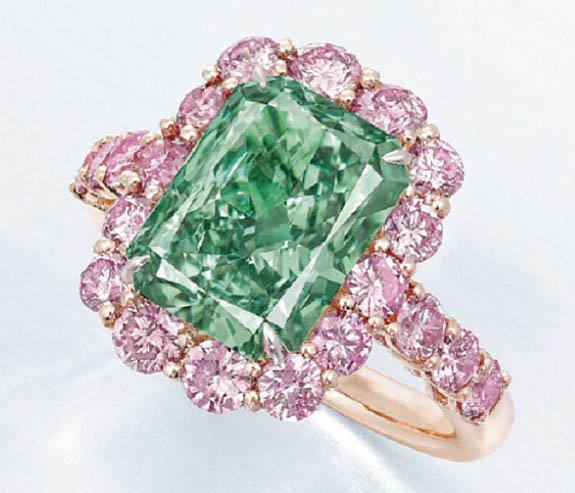 The rectangular-cut Aurora Green boasts a color that is rarely seen in the world of colored diamonds. Green diamonds are unique because they owe their color to their exposure to natural radiation as they were forming in the earth eons ago. Many a gemologist has gone a whole career without having handled a fancy vivid green diamond, no less one of 5-plus carats.

The Gemological Institute of America (GIA) included with its grading report a special note stating that the Aurora Green is the "largest fancy vivid green, natural color diamond GIA has graded as of 20 January 2016."

Because of this extreme rarity, gem experts speculated whether the Aurora Green might challenge the all-time price-per-carat record held by the “Blue Moon of Josephine,” a 12.03-carat vivid blue diamond that sold in November 2015 for $48.5 million, or $4.03 million per carat. If the Aurora Green had sold at the top of Christie's pre-sale estimate, the price per carat would have been close to $4 million.

The Aurora Green diamond was presented in a pink diamond halo setting. The GIA described the gem as a “cut-cornered rectangular modified brilliant” with a clarity of VS2.

There is a significant difference in the value of a green diamond rated "fancy vivid" vs. one rated "fancy intense." For instance, back in May of 2014, a 6.13-carat fancy intense green diamond (see above) was sold at Christie’s Hong Kong for $3.6 million, or $594,510 per carat. That's about 18% of the per-carat value of the Aurora Green. It's easy to see the deeper, more saturated color of the record-breaking stone.

A diamond-embellished Hermès Birkin became the most expensive handbag ever sold at auction when it fetched $300,108 at Christie's Hong Kong on Monday. 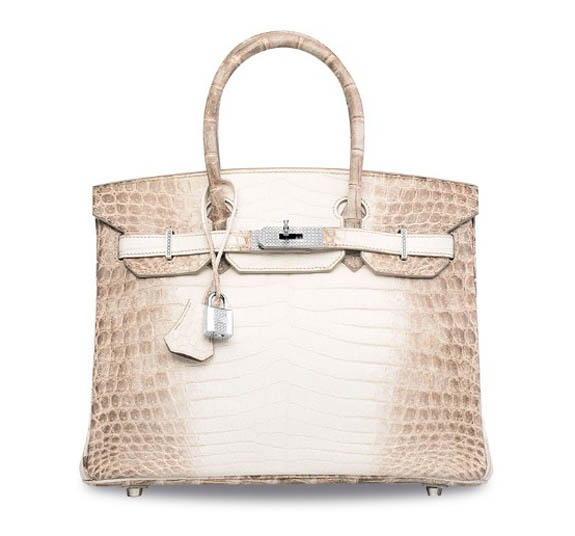 Described by Christie's as the "rarest, most sought-after, most valuable" of its kind, the matte white Himalaya Niloticus Crocodile Diamond Birkin features an 18-karat white gold lock, latch and buckles emblazoned with diamonds weighing a total of 9.84 carats. The bag is made of Nilo crocodile that has been specially dyed to evoke images of the Himalayan mountains. Christie's noted that "only one or two of the Diamond Himalayas are produced each year…" 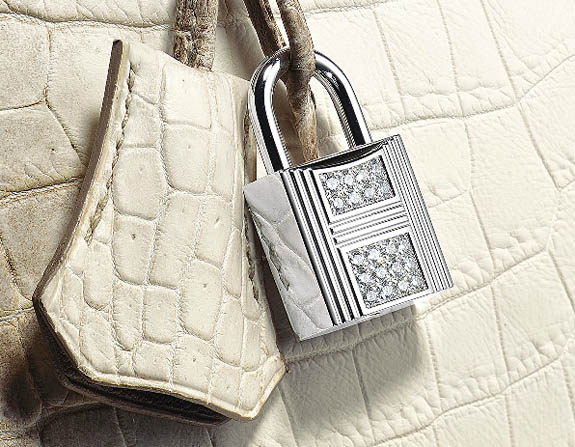 The Hermès Birkin crushed the short-lived record of a bright pink crocodile skin handbag by Hermès, which was sold at Christie's Hong Kong in 2015 for $220,000. The record-breaking handbag is now the property of an anonymous private collector.

Interestingly, the auction record-setter is less than 1/12 the value of the "1001 Nights Diamond Purse," which was crowned by the Guinness Book of World Records in 2011 as the most expensive handbag in the world. Created by the Geneva-based House of Mouawad, the $3.8 million heart-shaped bag is encrusted with 4,517 diamonds – 105 yellow, 56 pink and 4,356 colorless — for a diamond total weight of 381.92 carats.

Handcrafted from 18-karat gold, the completion of the 1001 Nights Diamond Purse demanded the skills of 10 artisans, working a total of 1,100 hours over a period of four months.

Posted by Susan Eisen at 6:47 AM No comments:

Self-proclaimed master gamer Shane Birkinbine took his relationship with girlfriend Pam Edwards to the next level by building a marriage proposal into a custom level of their favorite video game using "Super Mario Maker."

In a video that's been viewed on YouTube nearly one million times, we observe Edwards being coached by her boyfriend through a custom course he designed for the classic Super Mario Bros. video game. She carefully maneuvers through the level, earning gold coins along the way, but she's so intent on successfully completing the course that she's unaware that the last leg includes a special message spelled out in blocks.

As her screen character earns "star power" and knocks out a few of the lower blocks that make up the bottom of the "P" in the word "Pam," Edwards is asked by her boyfriend to take a closer look at the screen.

"How did you do that?" the surprise girlfriend asks.

"Babe! How did you do that?" asks the girlfriend, this time with a more excited tone.

Knowing that the blocks are spelling out a message, she carefully guides her character around them, instead of crashing through them. "I don't want to break it," she says.

She laughs and blissfully screams "babe" four times as her game character runs across the course revealing the rest of the message: "Will you marry me."

"Yes, of course," affirms Edwards as she breaks into tears.

Birkinbine posted the video to YouTube on May 21 with the caption, "Hope everyone enjoys just a bit of our special moment. Geeks do it better!" The touching display of creativity and affection quickly went viral, with viewership heading toward one million and media outlets picking up the story from every corner of the world. Among them were the Huffington Post, Time, NPR, Mashable, USA Today, Inquirer, Daily Mail and Yahoo News.

The romantic gamer acknowledged that the viral nature of the video can be credited to his fiancée's reaction.

"The positive comments make it all worth it... people like a feel-good story," wrote Birkinbine in the comments section of his YouTube video. "Just never thought it would come from our little corner of the world. This video is nothing without her reaction. She is the star." 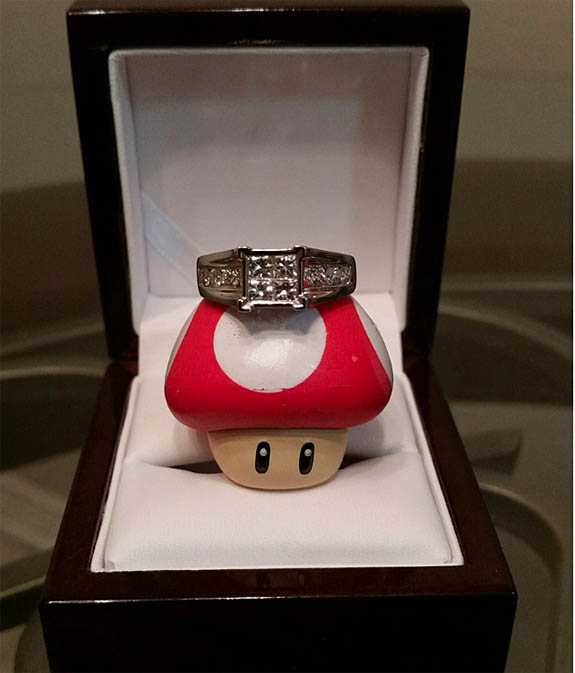 The romantic groom-to-be appropriately proposed with an engagement ring balanced atop a Super Mushroom, also known as a Power-Up Mushroom, originated in Super Mario Bros.

Check out Birkinbine's viral video below...

Posted by Susan Eisen at 6:47 AM No comments: