Music Friday: Engagement Ring and Pearl Necklace Are Among the Cherished Items Featured in Kenny Chesney’s ‘The Good Stuff’

Welcome to Music Friday when we bring you chart-topping songs with jewelry, gemstones or precious metals in the title or lyrics. Today, we have Kenny Chesney singing the #1 country music single of 2002, “The Good Stuff.”

In the song, a young man learns some critical life lessons from a middle-aged barkeep that recently lost his wife to cancer. The younger man goes to the bar after having a tiff with his missus, and orders “the good stuff.” But instead of delivering whiskey or beer, the bartender pours some milk and shares his views about the loving, romantic and momentous things in life that are really “the good stuff.”

Among these items are an engagement ring that falls into a plate of spaghetti and a pearl necklace that commemorates a special occasion.

The sing-along chorus contains these memorable lines… “'Cause it’s the first long kiss on a second date / Momma's all worried when you get home late / And droppin' the ring in the spaghetti plate / 'Cause you're hands are shakin' so much.” 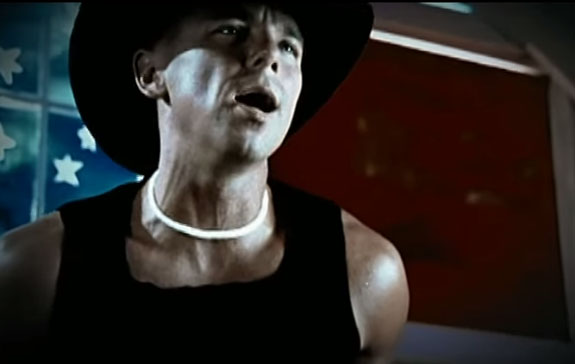 Later in the song, Chesney sings, “Was the sight of her holdin' my baby girl / The way she adored that string of pearls / I gave her the day that our youngest boy Earl / Married his high school love.”

Written by Nashville hitmakers Jim Collins and Craig Wiseman, “The Good Stuff” was the second single from Chesney’s album No Shoes, No Shirt, No Problems.

Wiseman told The Boot that “The Good Stuff” was loosely based on the heartbreaking story of a dear friend, Rusty Martin, who lost his wife to cancer.

“I actually played Rusty the song,” Wiseman said. “I told him the song was inspired by him in some ways so I wanted to make sure he was OK with it.”

Wiseman continued: “I had gotten in touch with the funeral home where he had buried his wife and had a matching foot stone made for her that was engraved with 'The Good Stuff.' I went and gave it to him at the No. 1 party. Everybody was crying.”

Born in Knoxville, Tenn., in 1968, Chesney has produced more than 30 Top 10 singles on the U.S. Billboard Country Airplay chart and has sold more than 30 million albums worldwide.

We hope you enjoy the official video for “The Good Stuff.” The lyrics are below if you’d like to sing along…

Well, me and my lady had our first big fight
So I drove around till I saw the neon light
The corner bar. It just seemed right so I pulled up.
Not a soul around but the old bar keep
Down at the end lookin' half asleep
But he walked up and said, “What'll it be?”
I said, “The good stuff.”
He didn't reach around for the whiskey.
He didn't pour me a beer.
His blue eyes kinda went misty.
He said you can't find that here.

[Chorus]
'Cause it’s the first long kiss on a second date.
Momma's all worried when you get home late
And droppin' the ring in the spaghetti plate
'Cause you're hands are shakin' so much
And it’s the way that she looks with her eyes and her hair.
Eatin' burnt suppers the whole first year
And askin' for seconds to keep her from tearin' up
Yeah man, that's the good stuff.

He grabbed a carton of milk and he poured a glass.
And I smiled and said I'll have some of that.
We sat there and talked as an hour passed like old friends.
I saw a black-and-white picture and it caught my stare.
It was a pretty girl with bouffant hair
He said that's my Bonnie, taken 'bout a year after we wed.
He said I spent five years in the bar when the cancer took her from me.
But I've been sober three years now
'Cause the one thing's stronger than the whiskey

Was the sight of her holdin' my baby girl
The way she adored that string of pearls
I gave her the day that our youngest boy Earl
Married his high school love.
And its a new t-shirt sayin' I'm a grandpa.
Bein' right there as our time got small
And holdin' her hand when good the Lord called her up
Yeah man that's the good stuff.

He said, when you get home she'll start to cry.
When she says, I'm sorry, say so am I.
Look into those eyes so deep in love and drink it up
'Cause that's the good stuff.

Posted by Susan Eisen at 6:50 AM No comments:

The 24-year-old Azalea laughed and said “Yes” after Young went down on one knee and asked the Australian-born singer if she would marry him during his carnival-themed 30th birthday bash. Azalea was caught completely by surprise, according to friends at the event.

The beautiful 18-karat white gold ring, which is estimated to be worth $500,000, was designed by Young with a professional assist from Beverly Hills designer Jason Arasheben. 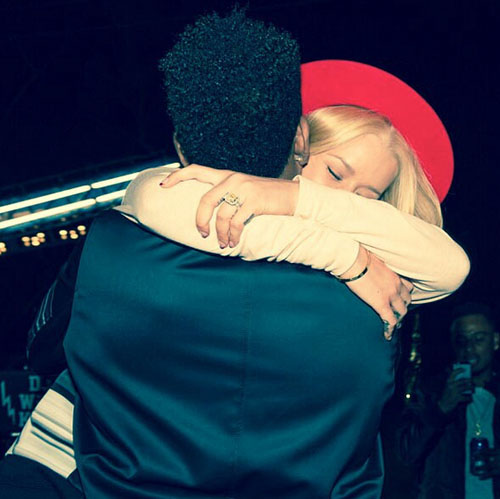 "Nick was very involved in designing the ring. We wanted it to be both a ring of Iggy's dreams and a ring that fit her personal style," Arasheben told Us Weekly. 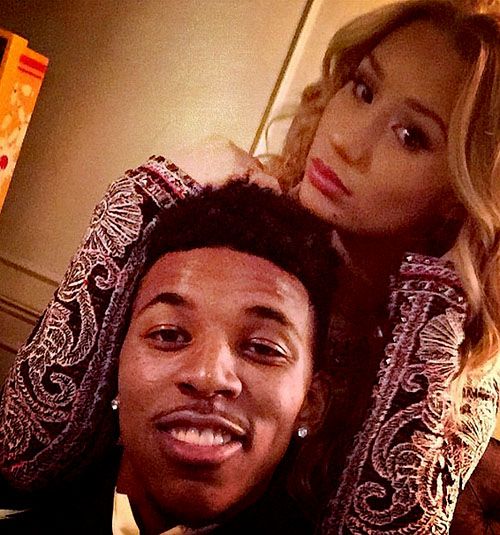 The 30-year-old shooting guard/small forward, who recently signed a four-year contract with the Lakers worth $21.5 million, visited the jeweler no fewer than four times during a two-month period to fine-tune the ring’s design, which includes 2.28 carats of white accent diamonds.

“He knew he wanted a cushion-shape stone,” Arasheben told PEOPLE. “He was very meticulous and changed minor details on the design a few times until we both felt it was perfect. He was really determined to create the perfect ring for her.”

Citing mental exhaustion, the “Pretty Girls” rapper recently cancelled her Great Escape world tour that was set to kick off in San Diego on September 18. She told Seventeen magazine that she been going non-stop for the past two years and needed some time to regroup.

“I need a break from everything to just enjoy what I worked so hard for,” she said, “and I don't really feel like I've had a chance to do that."

Now she can enjoy some quality time with her new engagement ring, handsome fiancé and millions of devoted fans on social media. Instagram is where Azalea shared some romantic shots, including a close-up of the ring.

"Happiest Day #Isaidyes," was the caption of the ring shot, which was liked by 395,000 fans. "Love you @swaggyp1," captioned a second shot of the couple kissing — with the new ring neatly in frame.

If Azalea’s impressive ring is giving you a feeling of rapper deja-vu, it may be because it is, in fact, very similar to the dazzler received by Nicky Minaj less than two months ago. That ring had a heart-shaped fancy yellow diamond center stone surrounded by a double halo of white diamonds. Minaj's ring was also estimated to be worth $500,000.

Posted by Susan Eisen at 6:22 AM No comments:

A St. Petersburg metal detecting club helped a bride avert disaster by finding the engagement ring she lost on her wedding day. 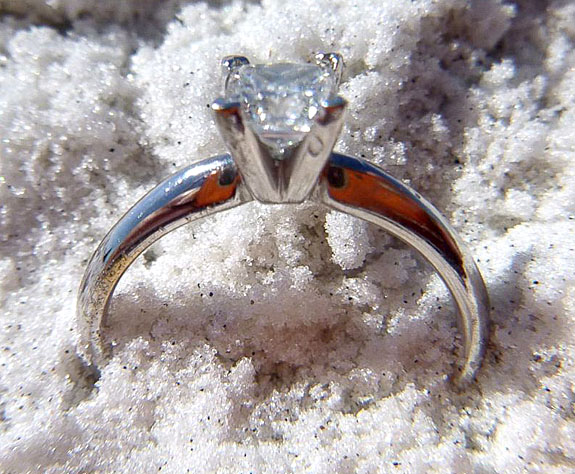 On Memorial Day, Liz Oswald and her husband were celebrating their wedding in the waters off Tarpon Springs, Florida – on the Gulf of Mexico side – surrounded by friends and family. After exchanging their vows, Oswald looked down and suddenly noticed that her cherished white gold, one-carat diamond engagement ring was gone.

“We were all hanging out in the water, and I looked at my hand and my ring was gone. It was pretty upsetting," she told FOX 13 News. Family and friends soon began to search, but were unsuccessful. “After an hour we thought, let's make the best of the day and we'll worry about it tomorrow."

Oswald contacted Suncoast Research and Recovery Club, a metal detecting club in St. Petersburg, Fla. Club members are metal detecting experts who search for lost items in sand and water. They responded within minutes, and were excited to help. Club President Tom Jones and three club volunteers boarded Oswald’s boat and began the harrowing search process in an area about the size of a football field.

“The volunteers helped us narrow it down,” Oswald said. “They threw their metal detectors into the water and walked through chest-deep [waves] as they searched.”

The critical moment came when a wedding guest sent Oswald text messages with pictures from the wedding. This helped the club members pinpoint where and when the ring fell off. In some photos, the bride was wearing the ring; in other photos, it was missing. "We ran a grid pattern," Jones said. "We marked off on the beach and tried to make sure we covered every square inch of the area."

Oswald had been doubtful she would ever see the ring again. "I was really hoping but I felt it was a slim to none chance," she admitted. "The first hour and a half was pretty grim, but within two hours they found my ring."

In a tearful call to her husband, Oswald exclaimed, "They found it! In like two feet of water! Oh God, I'm so happy they found it. I'm so sorry I lost it."

Oswald's husband, who was heartbroken over the loss, was thrilled to hear the good news. "They had no hesitation in helping me," Oswald said. "They never once asked for anything in return... They are kindest people you'll ever meet."

Jones noted that Oswald's ring was the 27th ring his metal detecting group has found this year. “When I took over as president, me and the board decided we should use our talents to help people. When we found it, she broke down and she cried. She was just beside herself… She broke down and hugged me.”

"I'm still in shock...I still can't believe it's back on my finger," Oswald said. "It's very emotional because it's a big day, you get married and you lose your engagement ring and you think it's gone forever and these amazing guys with metal detectors come out and find your ring."

Oswald has one word to describe the volunteers who found her ring: “Angels."

Posted by Susan Eisen at 5:31 AM No comments: