Welcome to Music Friday when we bring you sensational songs with jewelry, gemstones or precious metals in the title or lyrics. Today, we flash back to the 1980s and join the German rock/synthpop group Alphaville singing their blockbuster hit, "Forever Young." The song, which became a sing-along anthem in 1984 and charted in nine countries, contains the key phrase: "Youth is like diamonds in the sun, and diamonds are forever." 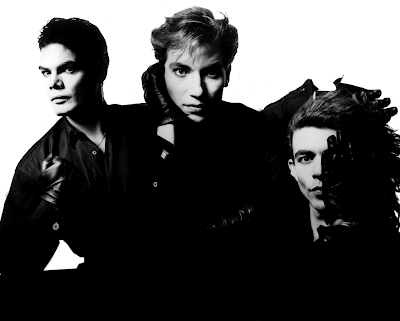 The song has been covered by numerous musical groups and has appeared in television series, movies, and advertisements. It was featured in the school dance scenes of the movies Listen to Me and Napoleon Dynamite.

Here's a cool fact: The band was formed in 1982 and named Forever Young before changing to Alphaville in 1984.

In 2001, Alphaville released a new set of remixes in a "limited fan edition" called "Forever Young 2001." The CD was offered to fans for free (they only had to provide a small fee for postage), and the names of every fan that requested a copy was printed on the inside cover of the CD.

Let's reminisce with Alphaville. The lyrics and video are below. Enjoy...


Let's dance in style, let's dance for a while
Heaven can wait we're only watching the skies
Hoping for the best but expecting the worst
Are you going to drop the bomb or not?
Let us die young or let us live forever
We don't have the power but we never say never
Sitting in a sandpit, life is a short trip
The music's for the sad men
Can you imagine when this race is won
Turn our golden faces into the sun
Praising our leaders we're getting in tune
The music's played by the madman

Some are like water, some are like the heat
Some are a melody and some are the beat
Sooner or later they all will be gone
Why don't they stay young
It's so hard to get old without a cause
I don't want to perish like a fading horse
Youth is like diamonds in the sun
And diamonds are forever
So many adventures couldn't happen today
So many songs we forgot to play
So many dreams are swinging out of the blue
We let them come true

Jorge Mario Bergoglio of Argentina became the new leader of the Roman Catholic Church on Wednesday, taking the name Francis I. The 76-year-old Pope Francis appeared on the central balcony at St. Peter's Basilica and waved to the throngs below. "Pray for me," said the new pontiff. Although Pope Francis wore a gold ring on the ring finger of his right hand, missing from the third finger of the same hand was the Fisherman's Ring — also known as the Piscatory Ring. Each new pope gets a new ring, so the traditional papal insignia is currently being customized and crafted from 35 grams of pure gold. It will be presented during his inaugural mass on March 19. The image carved into the ring has evolved throughout history, but the modern image depicts St. Peter, who was a fisherman, and carries the inscription of the pope's official title in Latin. The elliptical shape of the ring represents the piazza in front of St Peter's Basilica. Until 1842, the Fisherman's Ring was used to seal official documents signed by the Pope.

The Fisherman's Ring worn by Pope Francis' predecessor, Pope Benedict XVI, who resigned last month, was "scratched" and retired. The ring had been kissed by thousands of the Pope's devotees during his eight years of service — from heads of state and priests to common people from every walk of life. Rumors abounded that Benedict's ring would be smashed by a silver hammer, which was the ancient tradition, but those rumors proved false. Instead, it was defaced with two deep cuts in the design so that it can no longer be used as a seal.

The Vatican announced that the new pope's ring would be the same as the previous one — except for the name change.

Posted by Susan Eisen at 8:00 AM No comments:

Although we've known about the engagement of actress Olivia Wilde to actor Jason Sudeikis since January 14, the beauty's engagement ring has been a bit of a mystery.

Then, last week, Glamour weddings writer Kim Fusaro solved the mystery when she and Wilde attended a high-profile event in New York City. The writer scored a clear look at the actress's ring and was surprised to see it wasn't just "another generic Hollywood iceberg." She wrote that the ring featured a "not-obnoxiously-big round diamond surrounded by an emerald halo and set in yellow gold with a super-thin band. I've never seen anything quite like it!" The 29-year-old Wilde began dating the 37-year-old Sudeikis in late 2011 and he apparently popped the question during the holidays this past December. Wilde is best known for her work in television and film productions, such as The O.C., The Black Donnellys, House, Tron: Legacy, Cowboys & Aliens, and In Time. Her new beau is a comedic actor, who is famous for his dead-on impressions and hilarious skit work during his tenure on Saturday Night Live.

Here's a First Look at 'The Bling Ring,' Sofia Coppola's Film About a Gang of Fame-Obsessed Teens

Actress Emma Watson sheds her lollipop-sweet image to star in Sofia Coppola's new movie, The Bling Ring, a story about an actual gang of fame-obsessed teens, who break into the homes of Hollywood's rich and famous and treat themselves to more than $3 million in jewelry, art, clothing, electronics and cash. The 22-year-old Watson, who is best known for her role as Hermione in the "Harry Potter" movie franchise, plays the leader of the notorious "bling ring," which burglarized the homes of young celebrities, including Rachel Bilson, Orlando Bloom, Miranda Kerr, Audrina Patridge, Lindsay Lohan and Paris Hilton, during 2008 and 2009. In a fun twist, Hilton has cameo in Coppola's film.

The Los Angeles teens scanned social networks to determine when celebrities would be on the road. Then, the gang would break into their empty homes to party, sample their wardrobes and steal their jewelry. In real life, it took authorities more than a year and a half to catch the teens. According to reports, the movie will focus on events both before and after their arrests.

The Bling Ring is the latest film from Sofia Coppola, who scored box office gold with The Virgin Suicides and Lost In Translation. The Bling Ring is based on a Vanity Fair piece, titled "The Suspects Wore Louboutins," by Nancy Jo Sales.

The Bling Ring will open in select cities on June 14, with a wider release expected in the weeks after that. Here's the official trailer for the film.

A romantic marriage proposal carefully staged on a outcropping of rocks at a scenic beach in Southern California, turned into an epic disaster when, in mid proposal, the loving couple was blasted by a rogue wave and rolled onto the shore.

Fortunately, Matt and Lis were unharmed, the diamond engagement ring survived the ordeal, and the lovely, but soaked to the skin, bride-to-be eventually said, "Yes." Lucky for us, photographer Jonathan Hwang — a friend of the couple — was on hand November 21 to document this memorable moment for all of us to enjoy. His still photographs are breathtaking, and the companion two-minute video, with 383,000 YouTube views, is both shocking and hilarious. The story and video hit The Huffington Post last week and quickly went viral. Here's how it all went down, according to an account by Hwang.

Matt Hartman had planned the perfect marriage proposal. It would take place at the scenic Aliso Beach at sunset. He would lead his girlfriend, Lis, from the beach to an outcropping of flat rocks, where he would serenade her with a song he composed especially for the occasion. Then he would drop to one knee and present his love with a diamond engagement ring. But before Hartman could complete his proposal, something went terribly wrong...

Apparently, Mother Nature wasn't going to cooperate on this day, and she let loose with a mammoth wave that blew the couple off the outcropping and sent them tumbling onto the beach. Undaunted, the soaked lovers collected themselves and completed the proposal on dry land. According to Hwang's account, Hartman slowly opened the jewelry box and let out a huge sigh of relief upon discovering that the ring was still there. Photographer Hwang had a suspicion the day might end up wetter than expected. Hartman's original plan was to have his friends set up a path of candles leading to the rock outcropping. That part of the plan failed when a large wave wiped out the candles and the friend who was laying them down. "Having witnessed that scene, everyone began to panic and we almost decided to have the proposal on the beach instead of out on the rocks," Hwang told petapixel.com. "I tried my best to reassure everybody, telling them, 'What are the chances of it happening during the actual proposal?'"

The photographer was embarrassed to admit that he was secretly hoping they would be swallowed by a wave. "Looking back, it probably was not the wisest thing to put the two in potential danger," he said, "and thankfully nobody was hurt." Here's the video...